Programs that serve as an excellent tool to develop interest in STEM fields. With so many different types of robotics programs, there is something for every age and skill level.

The CSM Robotics Challenge was started in 2007 as one of the projects funded through the college’s National Science Foundation (NSF) grant.

Since 2016, both leagues have been going strong with representation from nearly every public middle and high school in the tri-county area, as well as a number of non-public school organizations.

It’s never too early to discover STEM. FIRST LEGO League Jr.* is designed to introduce STEM concepts to kids ages 6 to 10 while exciting them through a brand they know and love − LEGO®.

Guided by two or more adult Coaches, teams (up to 6 members, grades K-4) explore a real-world scientific problem such as food safety, recycling, energy, etc. Then they create a Show Me poster that illustrates their journey of discovery and introduces their team. They also construct a motorized model of what they learned using LEGO elements. In the process, teams learn about teamwork, the wonders of science and technology, and the FIRSTLEGO League Jr. Core Values, which include respect, sharing, and critical thinking. At the close of each season, teams come together on a regional basis to share their Show Me poster and model, celebrate, and have fun!

Tomorrow’s innovators practice imaginative thinking and teamwork. Guided by two or more adult Coaches, FIRST LEGO League* teams (up to 10 members, grades 4-8**) research a real-world problem such as food safety, recycling, energy, etc., and are challenged to develop a solution. They also must design, build, program a robot using LEGO MINDSTORMS®, then compete on a table-top playing field.

It all adds up to tons of fun while they learn to apply science, technology, engineering, and math concepts (STEM), plus a big dose of imagination, to solve a problem. Along their journey, they develop critical thinking and team-building skills, basic STEM applications, and even presentation skills, as they must present their solutions with a dash of creativity to judges. They also practice the Program’s Core Values, which emphasize discovery, teamwork and good sportsmanship.

Combining the excitement of sport with the rigors of science and technology. We call FIRST Robotics Competition the ultimate Sport for the Mind. High-school student participants call it “the hardest fun you’ll ever have.” Under strict rules, limited resources, and an intense six-week time limit, teams of students are challenged to raise funds, design a team “brand,” hone teamwork skills, and build and program industrial-size robots to play a difficult field game against like-minded competitors. It’s as close to real-world engineering as a student can get. Volunteer professional mentors lend their time and talents to guide each team. Each season ends with an exciting FIRST Championship.

It’s way more than building robots. FIRST Tech Challenge teams (10+ members, grades 7-12) are challenged to design, build, program, and operate robots to compete in a head-to-head challenge in an alliance format. Participants call it “the hardest fun you’ll ever have!” Guided by adult Coaches and Mentors, students develop STEM skills and practice engineering principles (like keeping an engineering notebook), while realizing the value of hard work, innovation, and sharing ideas. The robot kit is reusable from year-to-year and can be programmed using a variety of languages, including Java. Teams also must raise funds, design and market their team brand, and do community outreach for which they can win awards. Participants have access to tens of millions of dollars in college scholarships. Each season concludes with Super-Regional Championships and an exciting FIRST Championship.

VEX Robotics CompetitionIn the VEX Competitions, presented by the Robotics Education & Competition Foundation, teams of students are tasked with designing and building a robot to play against other teams from around the world in a game-based engineering challenge. Classroom STEM concepts are put to the test on the playing field as students learn lifelong skills in teamwork, leadership, communications, and more. Tournaments are held year-round at the regional, state, and national levels; local champions go on to compete against the best in the world at VEX Worlds each April!

By exposing students to an inquiry-based, learn-by-doing activity that appeals to their hearts as well as their minds, Botball® addresses our nation’s need for a well-prepared, creative, yet disciplined workforce with leadership and teamwork experience.

In January, February, and March, the Botball® Educator Workshops provide team leaders and mentors with technology training and introduce the details of that year’s game. Then, after a build period of about 7 weeks, students bring their robots to their regional tournament to compete against other students in the current season’s game challenge.

Students use science, engineering, technology, math, and writing skills to design, build, program, and document robots in a hands-on project that reinforces their learning.

Recognizing the importance of these programs, TPP supports CSM’s robotics program helping to ensure the continued success of robotics throughout the tri-county region. 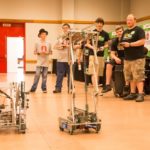 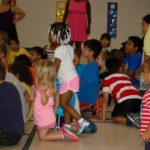 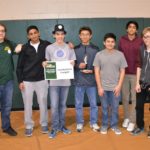 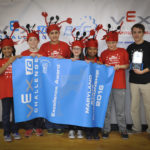 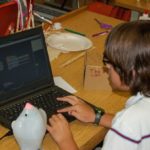 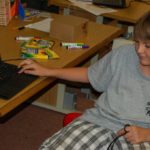 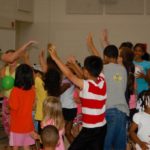 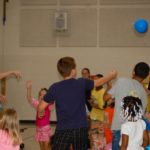 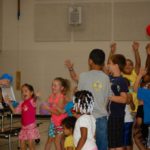